On this first day of spring
the white narcissus in my yard
hang their heads
still timid, barely more than buds,
planted so late in the fall
after the first frost
by this unskilled gardener.

The neighbors’ daffodils
and those in the park
and along the freeway through downtown
have all been aflame for weeks,
six-petaled suns
trumpeting hope
before I could feel it, before it was here.

I worried what the neighbors would think,
their late arrival
a sign of my irresponsibility,
the kind everyone notices
but no one mentions
like a baby born only seven months
after the honeymoon.

But there’s no expiration date on hope
I remind myself
after impatiently urging
my bulbs to bloom,
their pale blush and slow unfurling
now a joy that erases
this mother’s sense of shame. 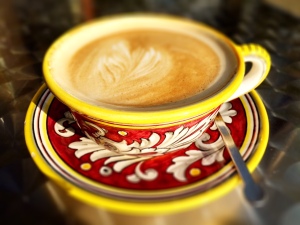 At home Dad drank Taster’s Choice decaf instant.
On the road he’d pour himself a cup
from the round-bellied glass pot,
scorched on its warming plate at the Seven Eleven.
He was ahead of his time,
before sippy-cups were marketed to busy grown-ups,
he used his red Swiss Army knife to cut a flap from the lid
so he could drink it in the car without soiling his tie.
Its searing temperature
leached fumes from the styrofoam
adding more chemicals along with the non-dairy creamer
and Sweet-n-Low from the pretty pink packets.
Caffeine-free and bitter,
his two cups a day were neither a physical need
nor a pleasure.
At most it was a habit
begun in basic training, continued at the officers’ club.
He didn’t believe in unfettered indulgences.
Pineapple upside-down cake, his favorite,
he ate once a year, baked by my mother
on his birthday.
And he’d nurse his Christmas bottle
of Chevas Regal 12 year blended scotch whisky,
the good stuff, he called it,
for an entire year.

After his example of extravagant frugality,
I parsed out my Halloween candy
until Easter.
And looked forward each year to
my mother baking my favorite
Duncan Hines Cherry Chip Cake,
the good stuff, I called it,
for my birthday.
But once I grew beyond my father’s example
and traveled to other tables
where coffee was freshly brewed from just-ground beans
and served at 3 o’clock in matching porcelain cups
with tarts, gateaux, and bowls of peaked whipped cream;
served with welcome, generosity, and pride,
without judgment, shame, or mention of sin;
I learned
to feel the pleasure of the warm cup between my hands,
to relish inhaling its toasted aroma in my nostrils,
to enjoy the glazed texture of the cup’s rim on my lips,
and to savor its exotic taste across my tongue.
French pressed, filter-poured, or espresso pulled
I learned the value of
self-acceptance over guilt,
joy over penance,
and gratitude over fear.

In a two-toned landscape of golden grass
and shades of steely gray,
three red apples shine at the pavement’s edge
like flashing lights called in response to tragedy.

But not always, the third is only true
if we pluck green fig leaves
as plates for cheese, and not to cover shame
for our raw nakedness, strength, and depth of feeling.

We come into the world unclothed,
and as babes cry unashamed,
it is the gift of our humanity to love and lose and grieve
so we may love again, return to Eden: home.