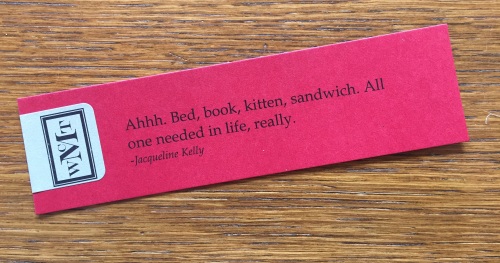 Authors like cats because they are such quiet, lovable, wise creatures, and cats like authors for the same reason.

Read the story of 1000 Bookmarks 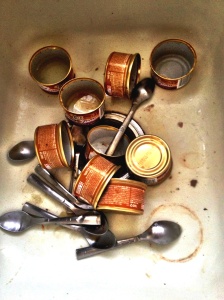 Grief has many faces, as many as there are mourners multiplied by the number of minutes in a day: straight-backed, stoic faces standing around an open grave; wailing war widows clutching at each other; small groups of murmuring voices holding plates of green bean casserole and handkerchiefs; or horn-playing, dancing revelers. For me one of its faces is reflected in my kitchen sink, matte and bare of finish from nearly 50 years of a Norwegian housewife’s scouring hands, the sheen of porcelain glaze, a flashy finery that was long ago sacrificed in favor of cleanliness. Mrs. Larsen would not approve of the slovenliness of my grief. She would express hers more tidily and industriously. If she still occupied this modest, working man’s house built with optimism five years after VE Day, it would be dust-free and the roses and rhododendrons in the yard would be appropriately pruned and mulched for the coming cold. She would have sent thank you notes written in a neat hand for each condolence card, bouquet or casserole received within a day of its arrival.

But I’m not Mrs. Larsen. I’m not Mrs. Anyone. I can’t even claim the title of widow because we weren’t yet married. I have the pretty license in an envelope, all the spaces for names and dates are blank; William died two months before our wedding day. In these three months since I’ve become a groom-less bride, some of my condolence cards have still remained unopened and unread. Even remembering where my boxes of pretty, blank cards are packed is the closest I’ve come to writing a thank you note to acknowledge their receipt. The messiness of my grief isn’t confined to the dining room table littered with mail, the unmade bed or stacks of overdue library books in the house. It’s spilled over into the empty plastic water bottles rolling around the back of the car and the business spread sheets I keep promising myself to send to my accountant, a promise I’ve broken every day for the past five weeks.

I’m not depressed. I’m grieving, something we don’t often acknowledge, let alone express openly in this country. I’ve cried every single day since William died on July 18th of this year, but I’ve also smiled and laughed most days and even felt joy sometimes. My life was ripped open by the .22 caliber bullet he fired into his brain, and a life ripped open will never look the same, no matter how skilled a team of emotional plastic surgeons one has.

I’m fortunate to be surrounded by caring, sensitive people, many of whom are capable of just sitting with me and my grief, even holding me and hearing it wail and scream like a wounded animal without trying to fix it. Because this horrible, tragic, violent act can’t be undone, and that’s the only way it could be fixed. But some try to, by ignoring it and not mentioning it at all, as if not naming it means it didn’t happen. I’ve had hour long conversations with acquaintances or in-laws I hadn’t seen since before my grief began, in which William’s death and life were never mentioned as if he never existed. I’d begin to think, “Perhaps they haven’t heard, maybe they don’t know what happened.” Yet when I finally say that I’ve been struggling lately, that my fiancé killed himself, three-quarters of the time they respond with, “Yeah, heard about that,” followed by their voices trailing off to nothingness. Hearing this makes me want to punch them in the face, and I have no natural, violent tendencies. “I can’t imagine what you’re going through,” or simply “I’m so sorry for your loss,” would be fine. They’re classics, and you can never go wrong with the classics. But to ignore that a person right in front of them is grieving, that a beloved person has died, is unacceptable. When that happens I want to grab their shoulders, shake them, screaming, “Would you want to be so easily forgotten and ignored?!?”

William deserves better than that. And so do I, so does everyone who’s died or lost someone. He wasn’t “just a pebble in a pond, a few ripples and then nothing…” as he wrote to describe himself in one of his suicide notes. He was a curious, loving, sensitive, funny, responsible, quirky man. Before we met I was complete. I lived a full and satisfying life. William didn’t fill some empty place in me; he added to my life, made it easier, more fun and more profound. But now that he’s gone I feel like my right arm and left leg have been amputated and that my belly has been ripped open and eviscerated. I’m off kilter and don’t know what to do with my extremities. My gut aches and my limbs flail, and I drift without anchor.

Since early childhood I’ve been very self sufficient. At eight years old I baked my first cake without adult supervision, in the real oven, no Easy-Bake. At 12 I had my first job, a paper route that I grew so much that it had to be divided in two when I gave it up. In my teens and early twenties I moved to Europe twice. And I’ve been self employed for almost twenty years, currently as the owner of a restaurant in Seattle with 22 employees. I grew up never asking for help, and usually fought it when it was offered. But from William I learned to receive and to openly, unashamedly ask for help. He delighted in making my life better in any way that he could. And I gave him the gift of letting him help this opinionated, over-functioning, highly competent woman that I am. Nothing made him happier.

In the last month of his life as he was tortured by his starved brain and struggling with despair, I promised to take care of his sweet, little, long-haired gray kitty if anything happened to him. Boo-Boo likes the canned wet food with gravy, just like the southern gentleman in him used to like his biscuits and gravy. So I take extra care and stir in a little water to create more sauce before emptying the can into her dish each evening. It’s the kind of care William took of everyone he cared about, especially me and Boo-Boo, “his girls.” For 26 years I’ve been a professional cook and pastry chef, a master of elaborate dinner parties prepared sometimes with only the use of a hot plate. But these days thinning out cat gravy is the only cooking I can manage. I eat each meal out, or out of a box, not creating any dirty dishes to clean up. But without William here to help me, the cat food cans pile up in the sink. Grief looks different for everyone. Mine is very messy.

Forget Jesus, coffee-shitting cats are my personal saviors. How their digestive process can produce the smoothest coffee in the world is heaven’s creation. I’m grateful for the third world disciples who’ve committed their lives to serving the furry deities so I can enjoy a cup of coffee that costs me more than they earn in a year. Don’t pity their poverty; sifting through feline scat to harvest the sweetened cherries for their first world brethren is in the service of the Lord. Being saved from the fires of hell should be enough for them, Amen.